mark booth
THIS IS THE SOUND OF THE MILKY WAY
Evanston Art Center, Evanston, Illinois, 2008

Site specific three channel audio, electric light and adhesive vinyl installation.
THIS IS THE SOUND OF THE MILKY WAY 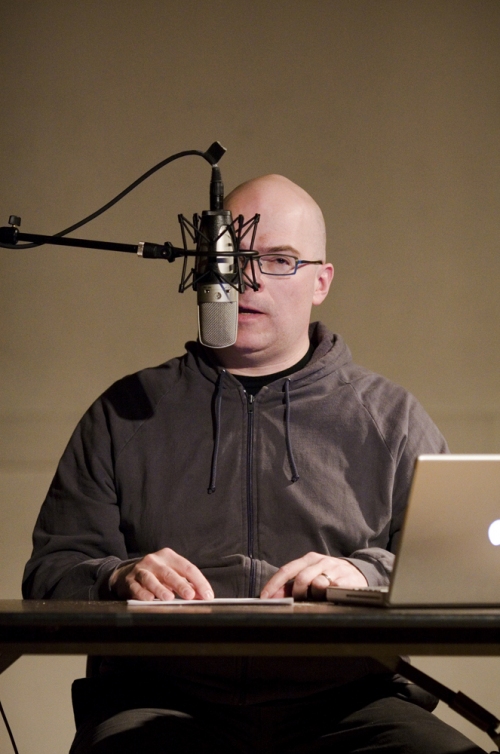 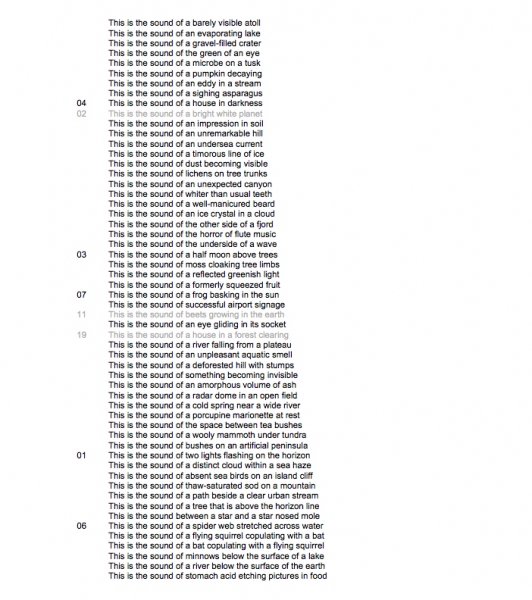 THIS IS THE SOUND OF THE MILKY WAY

Page two of the performance text. The text is organized so that the shortest line begins the piece and the longest line ends the piece. 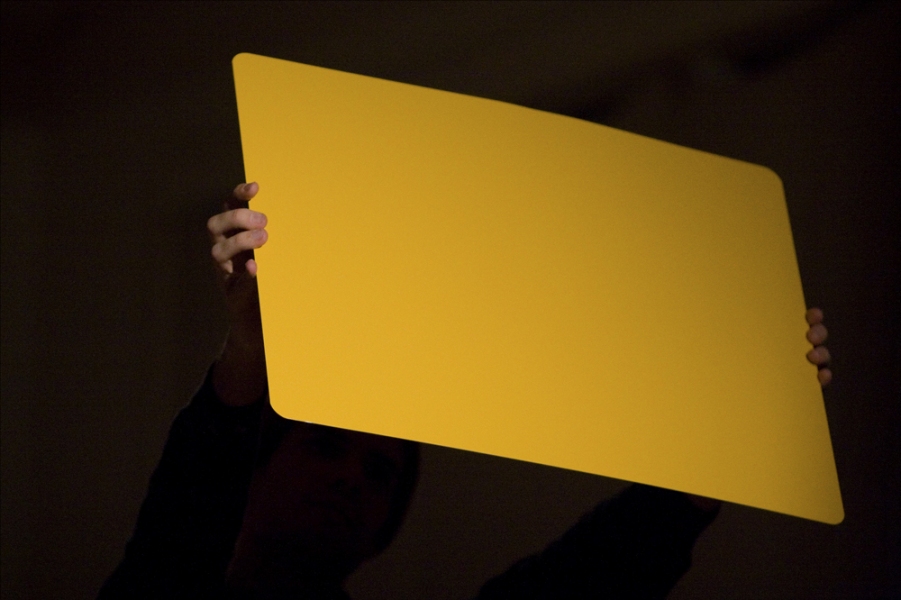 Performer (Ian Hatcher) holding up yellow sign during the reading to indicate that a line did not originate from a field recording but was invented. 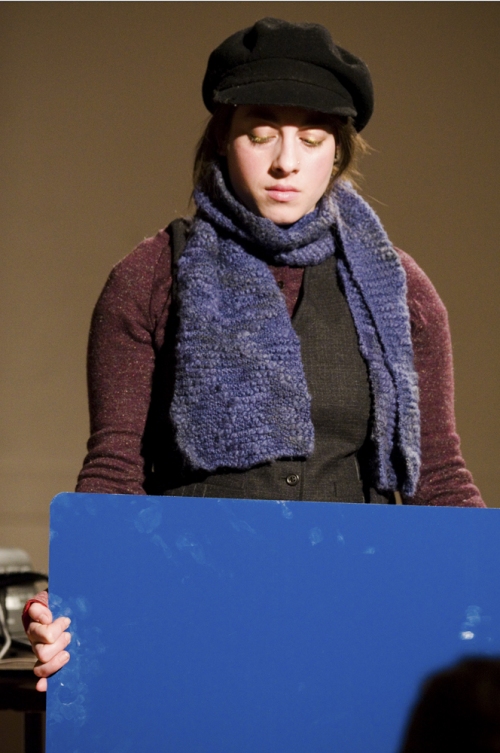 Performer (Laura Goldstein) holding up a blue sign during moments in the reading to indicate that the current line being read is a line from a field recording. 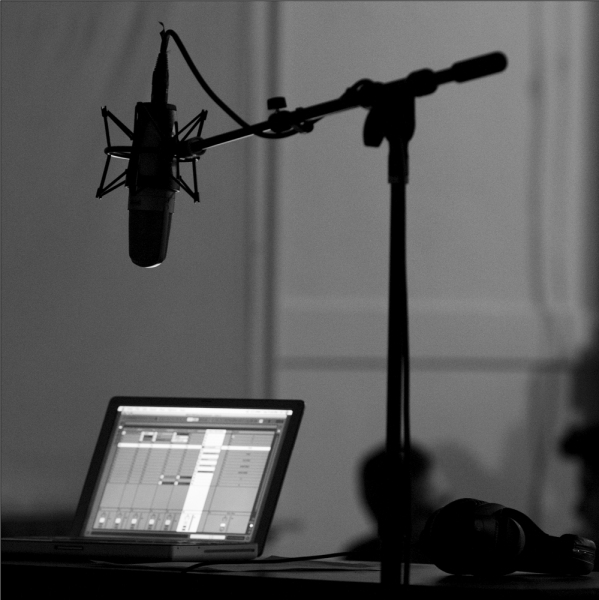 An image of the performance set up from down stage. A microphone for speech and a laptop with Ableton Live to cue and play field recordings. 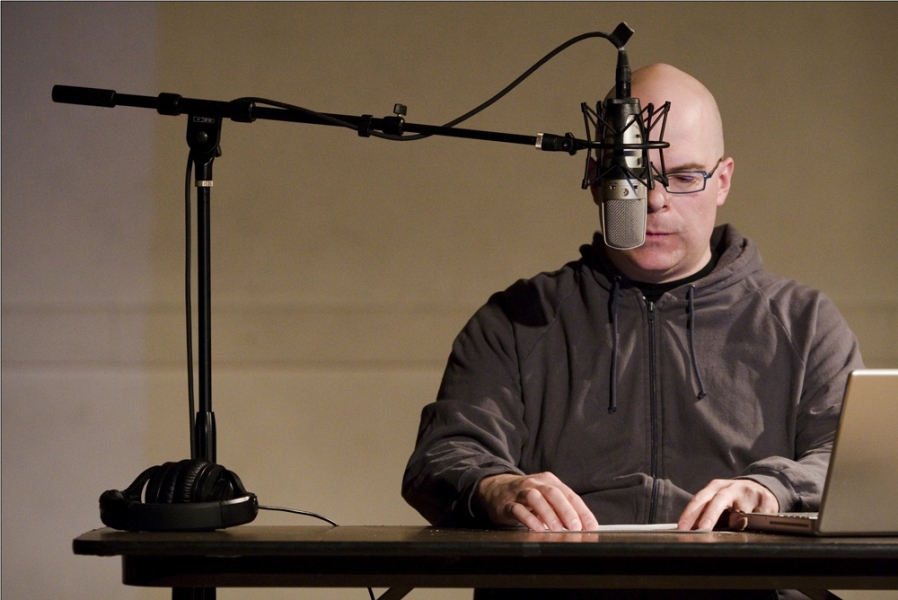 Performative iteration of two-channel audio project THIS IS THE SOUND OF THE MILKY WAY. Combining live reading, pre-recorded field recordings, and gestures.

This performance text consists of transcribed lines spoken spontaneously during field recordings (this is the sound of...) and interspersed with lines derived from the imagination. The lines are ordered from shortest line to longest line (as opposed to the date of recording). 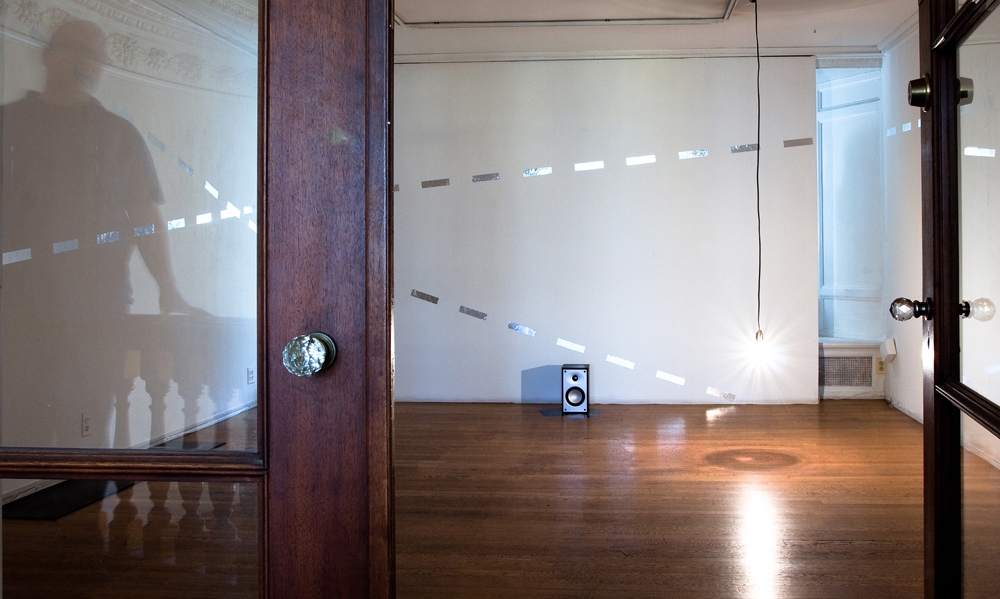 THIS IS THE SOUND OF THE MILKY WAY
2008 (project begun in 2003)
Three channel audio(endless loop), light, absented Flamarrion Book of Astronomy, appropriated image of the galaxy from the Charles and Ray Eames Studio, loudspeakers, and silver adhesive tape
variable

THIS IS THE SOUND OF THE MILKY WAY explores the differences between seeing and hearing, physical presence, environmental sound, and the limitations of technology. The work was begun in 2003 as an investigation of my presence in various acoustic environments.

The piece is composed of a "list" of field recordings accompanied by a narrator’s voice absurdly naming the intended subject of what is being recorded (“this is the sound of grass,” “this is the sound of a wall,” “this is the sound of a lion shaped cloud”). These recordings include sonic phenomena that can be recorded with conventional microphones (for instance - the sound water on stones, wind between buildings, conversational speech), and the named implication of sonic phenomena that cannot be recorded with conventional microphones (such as the sound of the sound the sun, the stars, a mountain from a distance, the bottom of the sea, the sound of the other side of the world through the earth). The piece paradoxically attempts to illuminate the differences between what can or can’t be recorded, what can be imagined through naming but not known, and the limitations of the technological prosthesis we employ to record experience.

The piece is, in a way, about the sound of our immediate environment, our line of sight or focus, and what is beyond sight (vicarious information - such as the reality of outer space), and what can be seen in conjunction with what is possible and impossible to hear. By pointing a microphone, with its inherent limitations, at the ground and saying a phrase like "this is the sound of the center of the earth" the work attempts to absurdly examines the zone between what can be imagined (or seen) and what is (heard), and what technology can and can not do.

For the exhibition Resounding the Environment at the Evanston Art Center I produced this installation version of the piece. The audio work is in it's ninth year of production and I hope that I will continue to record additional recordings for it until my death. 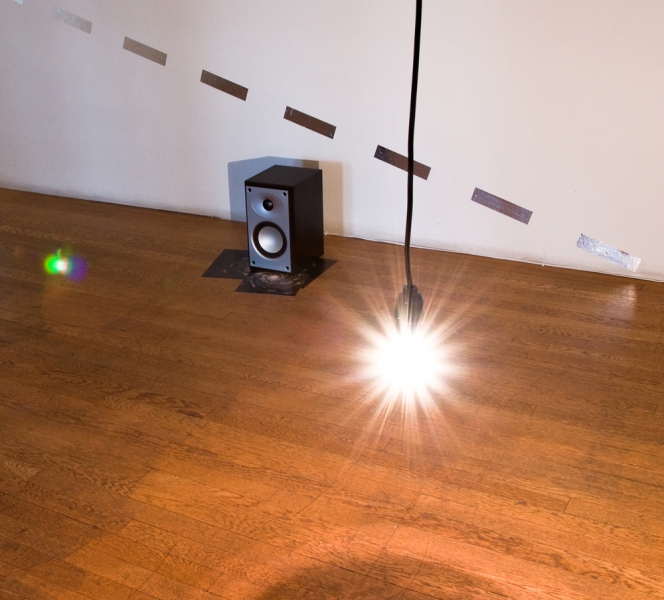 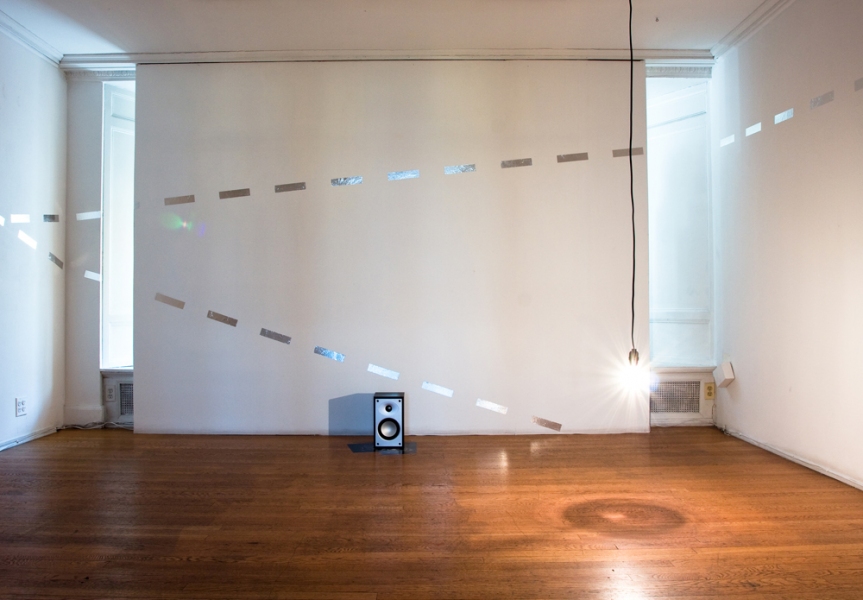 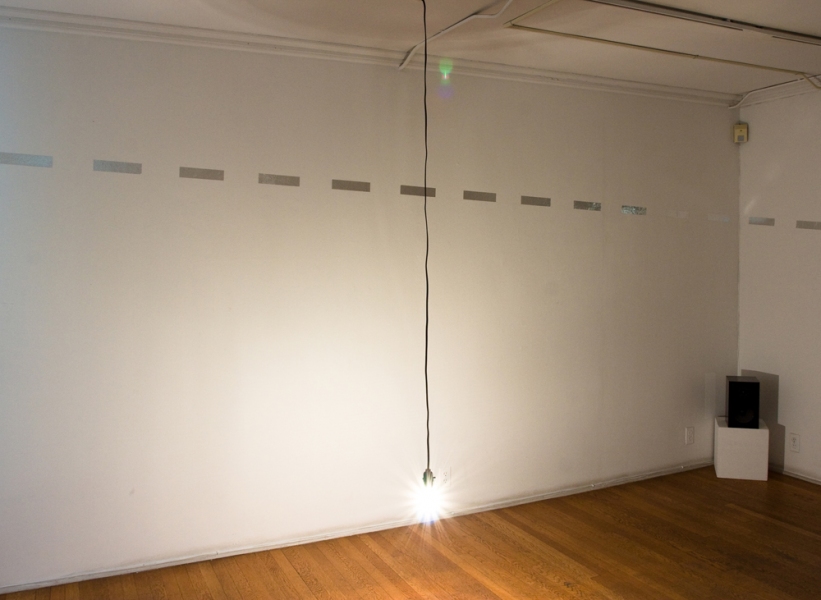 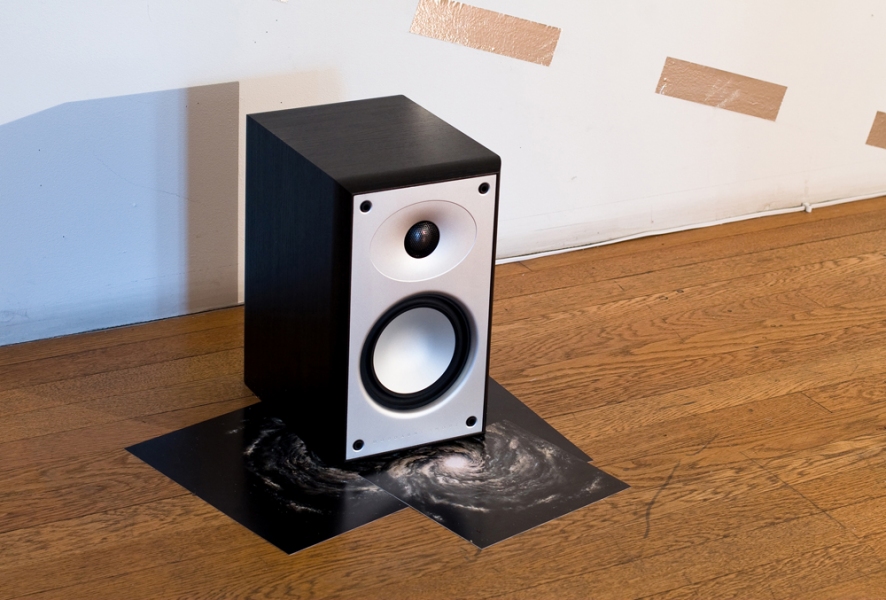 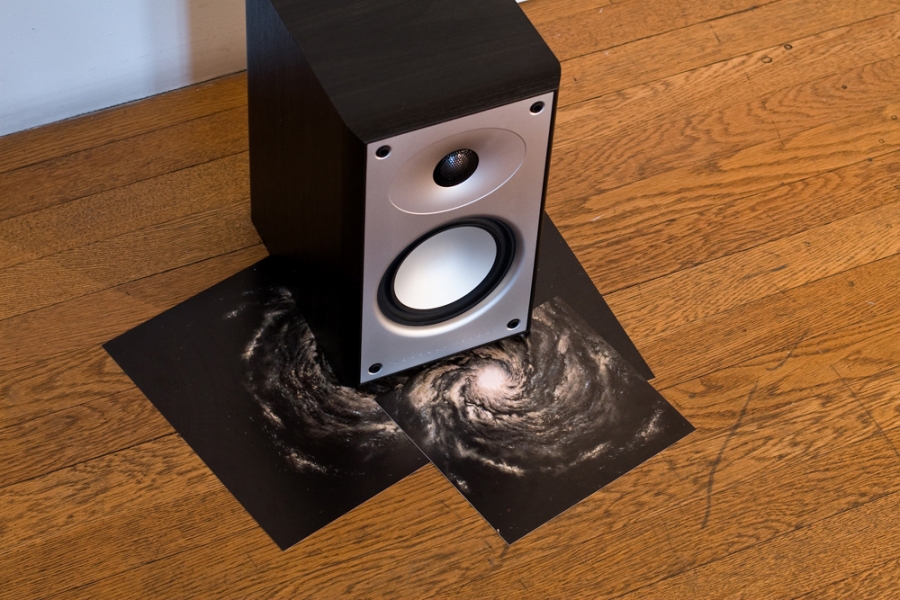 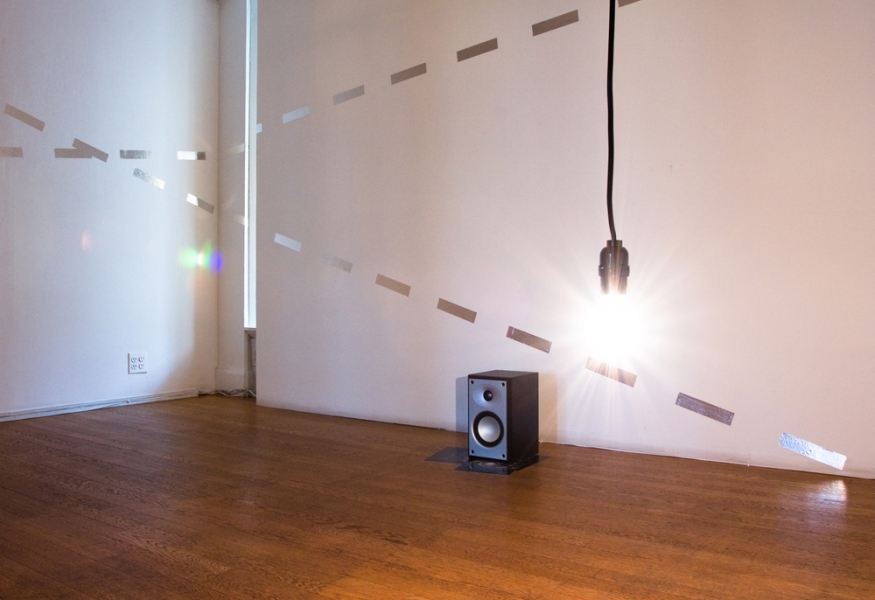